skip to main | skip to sidebar

In fact, it's a duplicate of a post on another blog. I felt, however, that it is fitting with both the theme of this blog, and the holiday season we're now in. One of My wifes favorite holiday tunes is the seemingly steamy-sultry seductive (I love alliterations) tune "Baby it's cold outside. Her favorite version is a particularly interesting rendition because it features two of my favorite folks.

Zooey Deschanel actress and recent M. Ward singing sidekick (of She & Him fame) 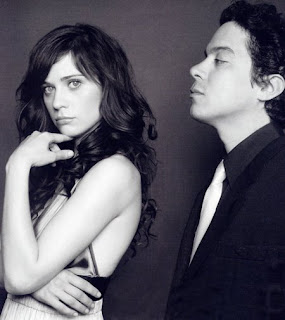 The male part is sang by the ever mysterious and always amazing Leon Redbone (I've seen him twice in concert, both times he was fan-tas-tic!)

Because both Zooey and Leon have these smooth quirky voices I've never really paid much attention to the lyrics of the song. Than as I was passing through the faculty lounge today I caught a different version of the song, and in particular a very specific line from one of the verses. I typed the female part in pinkish-red and the male part in greenis-yellow (sorta Christmas colors) so you can get the full effect of the song. It goes a little something like this...

The neighbors might think - Baby, it's bad out there
Say, what's in this drink - No cabs to be had out there
I wish I knew how - Your eyes are like starlight
To break the spell - I'll take your hat, your hair looks swell
I ought to say no, no, no, sir - Mind if I move closer
At least I'm gonna say that I tried - What's the sense in hurting my pride?

...I don't mean to sound like a cynic but this sounds like a date rape waiting to happen. How in the world did this song become a holiday classic? I'll tell you what he put in your drink Zooey, it's rufies...

I hate the hit-parade writers for ruining this Christmas gem for me. I'll never be able to listen to it again without the image of Mr. Redbone's lecherious smile and Zooey's bright eye'd innocent face going limp from the sedative dropped in her cocoa. At least there are some songs that maintain their Christmas integrity, like "Santa Baby".
Posted by El Jefe at 2:43 PM 57 comments:

Two close friends of mine married each other last weekend. We were privileged enough to attend the ceremony and the rest of the day celebrating the occasion with them. Traditions of LDS weddings state that during the luncheon the groom must get up and introduce his family as well as say something touching and heartwarming about the women he has recently married. This guy, who seems to always have the right response (be it verbal or a physical reaction) didn't disappoint. His proclamation was beautiful and sincere in accurately describing why they are perfect (and I mean PERFECT) for each other. As tears of joy welled up in his eyes, I actually had a moment where I choked up (which hasn't happened since I saw E.T. in 1983).

I was touched, I was proud, it was wonderful. It was in the midst of this beautiful proclamation of love that my wife leaned over and whispered ever so tenderly in my ear...

"YOU DIDN'T CRY AT OUR WEDDING".

Since the declaration of the untimely death of this blog, I have felt encouraged to write and entry. Seeing how nobody is reading this blog at the moment I am somewhat compelled to write a more sentimental entry. Given that it is THANKSgiving I wanted to list some of the things that I am thankful for learning from both this blog and from my time during modern, serious dating.

1. I am thankful I learned that no matter how you feel about that significant other that you are dating you should never, never, never comment about it on the blog. In spring 2007 I wrote an article about another who I had been recreationally kissing with. I made an open criticism about my teammate and it came back to haunt me in the form of text message informing me to F#$@ off.


That same season I made a another comment about how I had gone on a second date with another girl (yes I was a man-whore) and had totally dropped the ball. She found the entry less than a day after I wrote it. Luckily she had a good sense of humor and found it somewhat endearing. She went on to marry me and spend over $200 on decorative pillows, I still love her.

These two episodes have different endings but have emphatically taught me that you must always, always, ALWAYS keep your criticisms about dating to yourself!

2. I am thankful for Natalie's entry a few years back about the third party consultant. I can't explain this any better than she could, but it was so true to life that I decided to wait two weeks after I was dating Dr. Girlfriend to pray if I should marry her.


3. Finally I am thankful that this blog has sparked so many discussions between Madame Spouse (the former Dr. Girlfriend) and I about her dating life. Because she has had some amazing experiences with in her dating life that have provided me with hours upon hours of gleeful entertainment as she regales me with story after story of the dudes she used to date (all the time knowing she married the biggest doofess of all.)
Posted by El Jefe at 10:13 AM 6 comments: 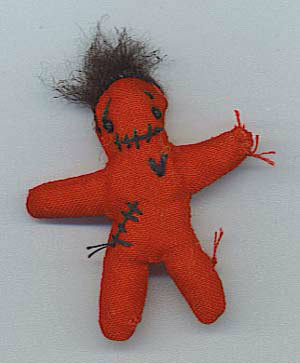 being practically 31 and still single, you can imagine that i have had my share of dating experiences. regardless of the age, the guy, where you are in life, etc., i think one major constant in the process is that you are going to go to your friends for advice, support and encouragement.

i'm sure most of the contributers to this blog (and likely the readers too) have had some crazy experiences while out in the dating world, and it's likely that you immediately go to your friends to tell them about it, vent about things, ask for advice, look for comfort, etc. i think it's great. even if i don't always take the advice of my friends (and they don't always take mine), what would i do without it? i love having people in my life that i can share all of these crazy happenings with. i think that's one big reason we even have friends in our lives...to share life with!

people who live in or have ever lived in the dating universe are going to have a lot of common experiences. but the great thing is that we also have different experiences and can therefore try to learn from each other.

anyway, my point in all this is that i have gotten some great advice from my friends over the years. some of it i have taken and some i haven't, but i either way, i have loved getting it. but i must say, my favorite bit of advice i've gotten from a friend this year was this:

i know he's probably harmless and he's a good friend of several of your/our friends, but i get a VERY weird, almost dangerous vibe from him. and not in, like, a sexy way. do you? i don't know... it seems like you could be exchanging harmless texts with him one day... and then next day, he's standing outside your front door naked and bloodied, holding a sign that says "NONE SHALL COME BEFORE THEE." And that sign is on fire.

i heard that making a list of questions to ask your date is a good idea. just write down a series of questions on a piece of paper or notecard. it's preferable if you pull out the actual list of questions while on the date. this lets your date know that you're taking this date seriously (which is different than wanting to seriously date).

the only real question is what questions do you include on the list?

for instance, i realized the population bottleneck crisis is threatening the survival of most of the world. and i'm not just talking about humans, but significant amounts of animal, plant and microbial life too. so i have strong feelings against having biological children. i'm totally for adoption (even though some people i know try to say that adoption isn't realistic in any situation ever), but would be against fathering biological children in most circumstances. so, should i include in my first date questionnaire a question about feelings regarding the ethical problems in having biological children?

also, i would suggest that each first date should have it's own list of questions.
Posted by brian at 3:31 PM 10 comments:

Every breath you take...

just yesterday i was asking brian if he thought the dating blog was dead and he said i dont think its dead and i said but it might be and then my friend tanya submitted a guest post. maybe its a sign. either way i always enjoy a nice post that reminds me of how much fun dating can be.
During my short stretch in Provo a boy who lived in SLC told me that every girl in Provo thinks she has a stalker… He said that secretly the girls exaggerate harmless crushes because they lack excitement in their lives and want to think someone would be crazy enough to be obsessed with them… I said I felt left out because I never experienced what every other girl in Provo had… I wanted a stalker of my very own… I asked him if he would stalk me just to be nice. He said no… rude.
But… I kind of felt stalked recently… or not really… maybe??? Who knows? I don't know why I felt so left out back in P town… Being stalked to the extent that SLC boy said every girl in P-town is stalked is not that exciting… it is not flattering… it is just nothing… it is just sitting at a party and looking up to see someone giving me an empty subjective stare… the kind of stare that penetrates the crowd and window between… the stare that you only catch if you look up right in the moment when because of the way other peoples reflections on the window allow you to see the stalker instead of your own reflection… p.s. when I say words like you I mean me…

I guess for the record he isn't a very thorough stalker… he will probably never read this… look in my windows or leave me breathy phone messages…none of the exciting stalker stuff…I think he is kind of a lazy opportunist stalker… ho-hum… just that empty stare… but... again… can it really be stalking if the only time I am the recipient of this stare is when there is nothing better to stalker stare at…
I guess I still long for my own personal P-town stalker… let me know if you or anyone you know is interested…
Posted by Guest Post at 8:41 AM 6 comments:

we have another MSDID engagement to announce! 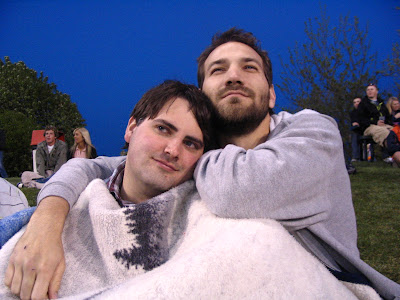 oh wait sorry this picture is the one i wanted. 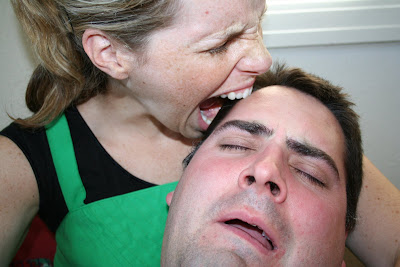